Home / World / Mexico and US at crossroads 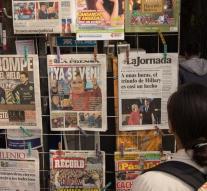 - A boxing match in which you can not actually do that, but that you still get the clap. As Mexico experienced the American elections of 2016. And it will take some time for all fragments are glued and licked the wounds. If that is successful with Donald Trump as president.

The undisguised xenophobia Trump, and the endless accusations and verbal abuse toward Latinos, felt as vicious jaw punches in Mexico. Working millions of migrants before the sweat on the back? To be put away as criminals, rapists and drug bandits?

The question is whether and how the Republican real estate magnate from the White House that can reverse impression. It seems, rather, that the relationship between the United States and Mexico, after twenty years of deep economic integration is at a crossroads. Trump kicks the integration slicing or prove all his previous campaign promises just rhetoric?

The NAFTA free trade agreement between Canada, the US and Mexico, early nineties was rolled out by Mexican political leaders with studies at the best universities in the United States. The trade has multiplied within the North American continent. In fact, cheap, efficient Mexican factories have been the salvation for the US auto industry. By cutting ties, seems irrational, almost impossible.

But Mexico has to do homework. Only one Mexican columnist dared to watch the last few days in the mirror. The negative outlook on Mexico in America will come from somewhere, Luis Rubio concludes in the newspaper Reforma. Shocking corruption, dishonest politicians and the excessive violence are a reality. ' If we want to change our image, we need to improve that reality. '' The internal challenge is perhaps even larger than befriending President Trump.