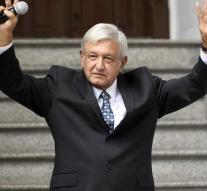 mexico city - The upcoming Mexican president Andrés Manuel López Obrador (64) abolishes the armed team that monitors the safety of the head of state. Instead, he surrounds himself in public activities by twenty unarmed men and women, some of whom are doctors, lawyers or engineers.

The two-thousand-strong presidential guard of the current president Enrique Peña Nieto, consisting of heavily armed soldiers, police officers and other security specialists, will be cut sharply. The measure is remarkable in a country that is plagued by deadly violence from, among others, drug gangs. During the last elections in Mexico there were more attacks on politicians than ever before.

'All Mexicans will protect me, there will be no special government body charged with the security of the President of the Republic,' promises Obrador, a leftist populist who was elected at the beginning of July with a majority of 53 percent of the votes..

Obrador commences on 1 December and has announced the opening of the presidential palace as a cultural center for the people.