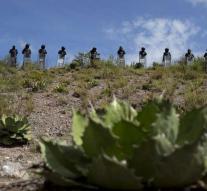 mexico city - The Mexican police found nine bodies on Saturday in a van. According to the Public Prosecution Service, the victims belonged to a group of eleven men who were kidnapped on Thursday in Tixtla, a city in the southern state of Guerrero.

Guerrero is considered one of the most dangerous areas in Mexico. A lot of poppy is cultivated for heroin production and different drug cartels compete for power.

Last year, more than 29,000 people were killed in drug violence in Mexico.