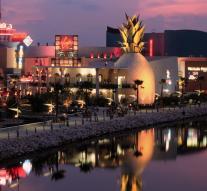 orlando - The fear of terrorism and American gun violence also for visitors to amusement parks in the United States effects. Disneyland and Disney World are placed metal detectors at the attractions, people over the age of fourteen may not come dressed up and no longer be sold little toy gun.

On Wednesday warned the US Department of Homeland Security that terrorists from home and abroad their eye could drop at public events and crowded places. Last weekend, police arrested another man in Disney World who wanted to enter with a gun in his pocket park.

Not only visitors to the Disney Parks are faced with tightened security measures. SeaWorld Orlando and Universal Studios Hollywood has also stepped up surveillance, reported the newspaper Orlando Sentinel Thursday.