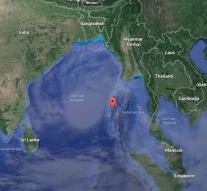 - Rescue workers have evacuated about seven hundred tourists, who since the beginning of this week were stuck on Indian islands in the Indian Ocean. The tourists could not leave the island due to bad weather the storm Vardah.

For more than seven hundred others it is a little longer bite and leave the rescue is still pending.

The stranded passengers were met with six ships and three helicopters of the islands belonging to the Andaman and Nicobar Islands. They were transferred to Port Blair, the capital of the archipelago.

Among the evacuees were about a hundred foreigners, but their nationalities were not disclosed.