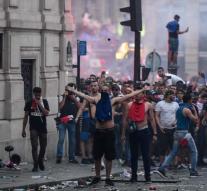 paris - In the night after the World Cup victory of France and the festive night of July 14, 845 vehicles went up in flames. Approximately 508 people arrested. The festivities degenerated into riots and the police in Paris, Lyon and Nantes, among other places, had to use tear gas to drive the screaming crowd apart. In Nancy, two children were injured when an engine entered the party crowd.

This is reported by various French media. In the night from Sunday to Monday, the French police had their hands full of wheel rotators who violently disrupted the celebration of the World Cup title. A water cannon was deployed in the capital alongside tear gas.