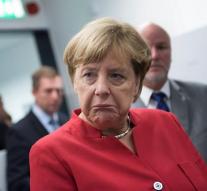 - German Chancellor Angela Merkel and her Christian Democratic Party CDU, according to a poll reached a nadir. Merkel, who has ruled the country since November 2005, has only the support of 41 percent of respondents, for her a very low score.

The Christian Democrats are in the Wednesday poll published something back to 33 percent. That is also the lowest score since the parliamentary elections of 2013, reported news channel n-tv Wednesday.

The Social Democrats have the support of 22 percent, the anti-immigration party Alternative for Germany (AfD) 12 per cent, the Greens also 12 percent, the radical left Die Linke 9 and the liberal FDP 6 percent.


Sunday there are elections in the northeastern state of Mecklenburg-Vorpommern.