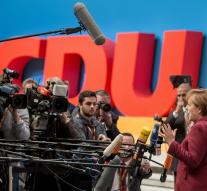 karlsruhe - German Chancellor Angela Merkel does not expect any problems with the refugee policy of the government at the party congress of her CDU (Christian Democratic Union). It starts Monday in Karlsruhe and resembled a bitter confrontation walk out between supporters of Merkel's relatively friendly policies and many Christian Democratic opponents. Who feel that the country absorbs too many refugees.

But Merkel said Sunday night on TV that a compromise text on its established policy. Who gives according to its " expresses its approach to refugees but also to the concerns of the people by making clear that the influx of refugees is reduced ".

The youth organization of the CDU on Sunday dropped the requirement that the party Monday and Tuesday clearly in favor of a maximum number of migrants. Other Christian Democrat leaders had also requested, but Merkel wanted less harsh language. She describes for example " reduce " the influx. About a thousand delegates come to the two-day conference.