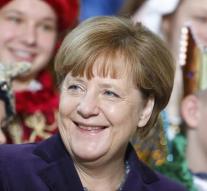 - The prestigious International Four Freedoms Award is awarded this year to Angela Merkel. German Chancellor is distinguished for reasons including its moral leadership, not only in Germany itself but also as a pioneer in the European refugee crisis and financial crisis.


That Han Polman, president of the Roosevelt Foundation and the King's Commissioner in Zeeland, Wednesday. Merkel takes the prize on April 21 received in Middelburg.
International Four Freedoms Award is awarded annually to people who are strong for the four freedoms, including the US President Roosevelt proclaimed in January 1941: speech, religion and freedom from want and fear. The prize is awarded alternately in Middelburg and New York.
NEW