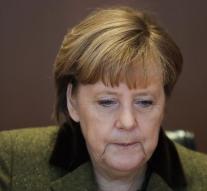 - German Chancellor Angela Merkel wants, according to sources in her party freeze talks on Turkish membership of the EU. According to German media, they spoke there on Tuesday night in front of the parliamentary group of her CDU party.

Merkel would then want to follow the line of the European Parliament, the EU Member States in a large majority last week called on to stop the negotiations for the time being. The reason for the ' disproportionate measures' taken by the Turkish government after the failed coup last summer, such as the arrest of Kurdish MPs and tens of thousands of suspected supporters of cleric Fethullah Gulen, who would have orchestrated the coup attempt from the US.

In public, Merkel has not yet ruled on the freezing of the talks. Turkish President Erdogan threatened last week ' opening the borders as Europe continues'.