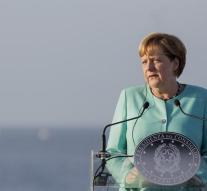 - Chancellor Angela Merkel will of people of Turkish origin in Germany more loyalty to the German state. In return,, we try to have an open ear for their wishes and understand them, '' Merkel said in the Ruhr Nachrichten on Tuesday.

Merkel urged supporters and opponents of Turkish President Recep Tayyip Erdogan in Germany to refrain from violence.,, The freedom of expression and demonstration is true in Germany for everyone who lives here, but obviously different opinions must be expressed by everyone in a peaceful manner. ''

In Germany live about three million people of Turkish origin. At the insistence of the coalition party SPD was in 2014 for children of migrants made easier to have dual nationality. Merkel has already announced not wish to further expand the existing possibilities.