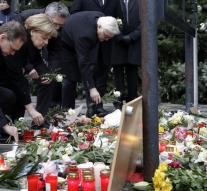 berlin - Chancellor Angela Merkel on Tuesday visited the place in Berlin where a Monday attack was committed. She stood among others paused at the flowers that lodged the audience at the Memorial Church near the site of the massacre in the center of the German capital.

Merkel was among others accompanied by Ministers De Maizière (Interior) and Steinmeier (Foreign Affairs). Earlier in the day, Merkel expressed disgust at the attack.

Because of the incident, in which a lorry drove through part of a busy Christmas market, lost twelve people killed and more than forty people injured.