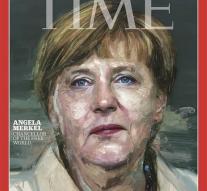 - Time has German Chancellor Merkel named person of the year. This is because of the role which Merkel has played in the refugee crisis and the European credit crisis.

According to Time, the German chancellor received that title, " because she has asked more of her country than most politicians would dare, because they have taken a clear and effective stand against tyranny and for having shown steadfast leadership in a world where there great lack is ".Time writes : " Whether you agree with her ​​or not, she does not choose the easy way. Leaders are only tested if people do not want to follow them. " Merkel, according to the magazine as an example for the whole world : " To be hospitable. Not to be afraid. To believe that great civilizations build bridges, not walls, and that wars are won, both on and off the battlefield. "
NEW