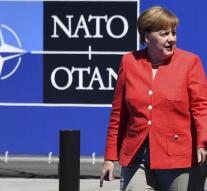 brussels - Germany withdraws its troops from the Turkish air force base, Incirlik, as German parliamentarians who can not visit. This threatened German Chancellor Angela Merkel on Thursday at the NATO summit in Brussels, where also Turkish President Erdogan is present. Merkel will convey the message 'very clearly' to him.

Berlin said earlier to consider moving about 260 soldiers to Jordan, but the threat now becomes more concrete. Erdogan said Wednesday that he had not heard anything from Berlin yet. He added that he did not care much about him and did not see a big problem. The German soldiers are in Incirlik because of the struggle against Islamic state.