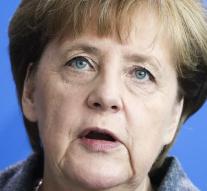 ,, It is tragic that this coup so many people lost their lives. The bloodshed in Turkey must stop now, '' Merkel said in Berlin Saturday.,, It remains to determine the rights of the people in free elections who can govern. Tanks in the streets and air attacks on its own population are unlawfully. ''