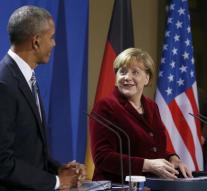 - Chancellor Angela Merkel in Berlin Thursday, US President Barack Obama thanks for the many years of trust and partnership. Merkel said that Obama himself even in difficult times is shown as a reliable partner for the past eight years. Obama is on a visit to Berlin on his last European trip as president. Friday he will fly to Peru.

Obama praised the European Union as one of the greatest achievements of the world. He hopes that will fight the European countries for the preservation of the union. He praised the German hostess and said he would vote for her if he was German.

Democrat Obama was January 20, 2009 President of the United States. In January, the controversial Republican Donald Trump succeeds him. Merkel said she will work with Trump to working closely with the US