Home / World / Merkel promises work for everyone in 2025 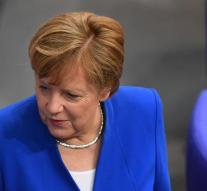 berlin - German Chancellor Angela Merkel wants full employment in her country in the next decade. That is the main promise of the election program of the Christian Democratic CDU, the party to which it listens to the Bundestag elections held on September 24th.

Merkel considers an unemployment rate of 3 as full employment. At present, 5. 5 percent of the labor force is in Germany. The last time unemployment in Germany was 3 percent was in the mid-seventies of the last century.

Other points in the CDU program, which will traditionally attract the Bavarian sister party CSU, are a 15 billion tax deduction, the construction of 1.5 million apartments and homes and 15,000 additional agents spread throughout the country.