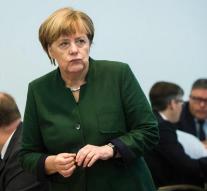 - Chancellor Angela Merkel will next week at the party conference of the CSU, the Bavarian sister party of her CDU. That they agreed according to CSU circles Friday with CSU chairman Horst Seehofer.

CSU thus breaking with a decades-old tradition. Participation of the President of one party to the convention of the other party applied within the 'Union' generally seen as a duty.

Merkel now stay away, has to do with the tension between the two party chairmen. Seehofer is not to speak of the political refugees of the Chancellor.