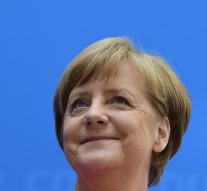 berlin - German Chancellor Angela Merkel thinks that Emmanuel Macron's election as a new president of France could give Europe a boost. She receives Macron later on Monday on his first foreign trip as French head of state.

Merkel wants to work closely with Macron. Germany and France have traditionally been the driving force behind European unification. 'It is only Germany's long-term success if Europe is going well, and the election of the new French president gives us the opportunity to give Europe more dynamism,' Merkel said.

Opposed to Macron, Merkel does not want to make it 'better'. 'I believe he has very strong ideas about what France should do or leave. 'He will stand up for French interests, they for the German. 'I'm sure they overlap to one another. '