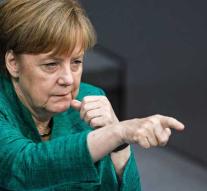 berlin - The disagreement on asylum policy can determine the fate and unity of the European Union. The German Chancellor Angel Merkel warned against this in the Bundestag, just before the European summit on Thursday and Friday in Brussels. The disagreement divides not only the EU, but also the Christian Democratic party of Merkel himself.

The Bavarian wing of the Christian Democrats (CSU) led by Minister of the Interior Horst Seehofer has demanded that Merkel can present a more stringent European approach to migrants after the summit. Otherwise, the Federal Republic would immediately stop impotent migrants at its borders. Seehofer was absent in the Bundestag when Merkel gave up her speech.

Merkel said it is unlikely that his wish will become a reality at the summit in Brussels. Merkel acknowledged that the EU member states are not yet ready to come to a single common asylum policy.