Home / World / Merkel: IS by no means defeated, now underground 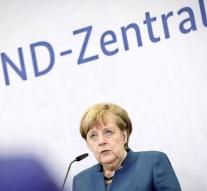 berlin - Islamic State is as good as expelled from Syria, but certainly not defeated. The German Chancellor Angela Merkel, for example, reacts to a remark by US President Donald Trump.

He said earlier this week that he might already report next week that also the last IS territory has been recaptured and the caliphate is definitely coming to an end. The president wants the 2000 US military in Syria therefore quickly home, possibly before the end of April.