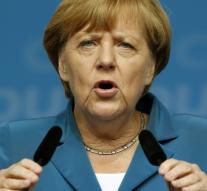 - The German anti- immigrant party AfD want Chancellor Angela Merkel to drag the court for smuggling . According to the Minister, the party is punishable as they left thousands of migrants entering the country who were stranded in Hungary , according to German media .

The AfD announced Friday in Berlin that it lodges a complaint with justice and hopes that it picks up the case. " Angela Merkel has acted as a smuggler ", said the vice president of the partij. The federal government decided in early September to open the borders to large numbers of displaced persons who were in Hungary and wanted to go to Germany.