Home / World / Merkel invites from May 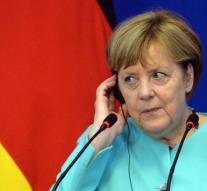 - German Chancellor Angela Merkel has invited the new British prime minister Theresa May for a visit to Berlin. Merkel announced on Thursday that she telephoned Wednesday evening and thereby invited the 59-year-old Conservative government leader with May.

May is the new prime minister in London, after her predecessor David Cameron Wednesday had resigned as a result of the lost referendum on British membership of the EU. Cameron guessed incorrectly that a majority June 23 would vote for the EU.

Merkel is traveling and speaking Thursday in the capital of Kyrgyzstan (Bishkek), did not discuss the appointment in London by Boris Johnson to new foreign minister. Johnson was one of the main advocates of a departure from the European Union.


May according to British media seems to want to give the Conservatives a more social and the party wishing to maneuver more to the political center. But her Wednesday shaped cabinet with people like Johnson and the 'chef Brexit' David Davis very right, analyzed the Guardian.