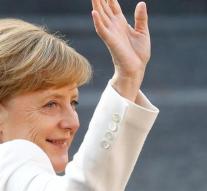 berlin - German Chancellor Angela Merkel is going to negotiate with the Conservative Liberal FDP and the Greens about a new, so-called 'Jamaica coalition' (black-yellow-green). It is for the first time that Merkel announces this officially since the CDU disappointing electoral elections.

Merkel made the announcement Saturday during a meeting of the party's youth department. The CDU has achieved the worst result since 1949 by about 33 percent. Because the SPD no longer wants to increase and lead the opposition Merkel should look for other coalition parties.

The FDP made a comeback during the elections after the Liberals did not reach the voting threshold at the previous polls and disappeared from the Bundestag.