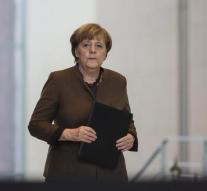 berlin - Germany wants more failed asylum seekers will deport. It is one of the measures that would make Angela Merkel quickly to secure the country, as they announced on Friday.

Merkel also called on the Tunisian President Essebsi to make it clear that his country more persons expelled, must take back.

Germany tried to put out unsuccessfully Tunisian Anis Amri. According to German media, was the man most likely the attack on a Christmas market in Berlin earlier this year killed two days in a deportation center. He could not be put on the plane, because his homeland did not admit him for lack of proper documentation.

Merkel said in imitation of her ministers that 'acute danger is over, but continues the threat of terrorism. 'She thanked the Italian authorities. Amri was shot dead on the night of Thursday to Friday by a policeman in a suburb of Milan. The Tunisian had shortly before another officer shot in the shoulder.