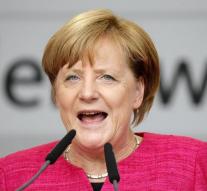 berlin - Just before the German parliamentary elections of Sunday, there seems to be virtually no movement in the voters' political preference.

Chancellor Angela Merkel's CDU remains by far the largest with 36 percent of respondents, according to a press release from the media, Stern and RTL, published on Friday. Martin Schulz's social democratic SPD remains in the poll of 22 percent.

The right-populated Alternative für Deutschland (AfD), according to the respondents, becomes the third party by 11 percent. With this, the AFD, founded in 2004 by Eurosceptics, will be in the Bundestag.

Fourth, left-wing Die Linke and the Conservative Liberals of the FDP (Freedom Democratic Party) are 9.5 percent. The Greens fall back to 7 percent. In the poll, no other party or grouping reaches the voting threshold of 5 percent.