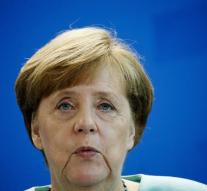 She said in a brief speech to the German parliament that there is no way back from the pathway that was taken in 1997 with the Kyoto Protocol and that of the 'Paris Historical Agreement in 2015'.

'To everyone who considers the future of our climate important, I say: Let's continue together on the road to which we are successful for Mother Earth,' said Merkel.