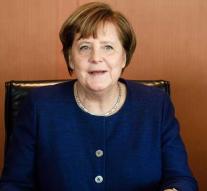 bremerhaven - German Chancellor Angela Merkel expressed her support for the people in Utrecht following the shooting in the city, in which three people were killed and five injured.

Many ministers from EU countries also expressed their condolences in Brussels to the victims of the Utrecht shooting. Foreign Minister Stef Blok had told his colleagues about the events in the cathedral city.