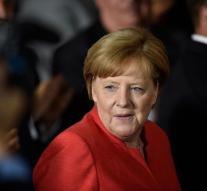 berlin - German Chancellor Angela Merkel congratulated French president Emmanuel Macron on his victory in the first election round of parliamentary elections on Monday. The new party of President La République and Marche! (LRM) achieved 32 percent of the votes on Sunday and won a major victory.

Merkel spoke on Twitter about 'a powerful mood for reforms. '

With the support of allies, the LRM is available on more than 400 of the 577 seats. The second ballot is Sunday. Macron needs a large majority in parliament to implement its desired reforms.