Home / World / Merkel: Europe has to take fate on its own 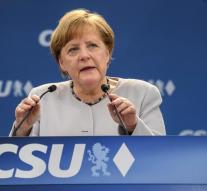 munich - After the G7 summit in Sicily, Angela Merkel has called on Europe to reflect on his own strength, due to Donald Trump's intransigent performance. 'We Europeans must really take our fate,' said the German Chancellor on Sunday at an election meeting in Munich.

'The times we could fully count on others are really over. I've experienced that over the last couple of days, 'said Merkel, without the name of Trump. The US president read NATO allies lesson, refused to support the global climate agreement, kept thinking about refugee policy differently, and agreed only with a mini-compromise on trade protectionism.

We must realize that Europeans must fight for our future. Of course, in friendship with the United States, with Great Britain and as good neighbors wherever possible with other countries, even Russia, 'Merkel said.