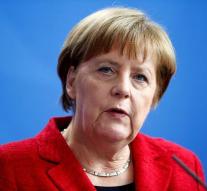 - German Chancellor Angela Merkel on Monday in the German population called for an 'open attitude'. She warned that the Donald Trump gains in the US elections could encourage the asylum debate in Germany. Trump has previously let referred to Germany 'idiot' to the decision of Merkel million migrants. According Trump has only led to a rise in crime.

' We should all follow suit now and lay our cards on the table for an openminded Germany, '' Merkel said of the election victory of Trump. ' The dignity of every human being is inviolable, regardless of religion, ethnicity, sexual orientation or other characteristics, such as gender. This is what must guide us, this is where we have to stand behind. ''