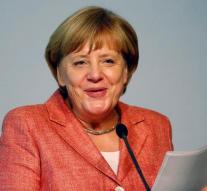 - The European Union should migration agreements should be concluded with North African countries such as Egypt and Tunisia, just as they did earlier this year with Turkey. Before that German Chancellor Angela Merkel advocates. At the same time Europe has to allocate more money to tackle the causes of migration to Europe.

Merkel stressed the importance ' to avoid a repeat of the situation last summer, '' referring to the influx into Europe of hundreds of thousands of refugees. But those fleeing poverty and war must be offered ' perspective for the future, '' said the Chancellor. ' Or should we let people come here, or we must address the underlying causes of migration so that people see are to remain where they live. ''