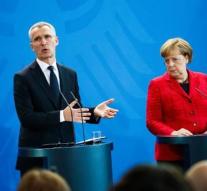 berlin - Federal Chancellor Angela Merkel does not yet feel like sending additional German soldiers to Afghanistan. 'I do not think we should be the first to increase our capabilities,' she said Thursday after an interview with NATO secretary general Jens Stoltenberg in Berlin.

NATO has asked Member States to provide more troops for Afghanistan. The political decision must be taken in a few weeks.

Afghan security forces have given way to the Taliban and extremists of Islamic state in recent months. The government now controls only 60 percent of the country.

NATO currently has 13,000 soldiers in Afghanistan, more than half of them Americans. Stoltenberg said earlier this week that the requested extra soldiers need not be combat troops. They must 'train, assist and advise Afghan forces', he said.