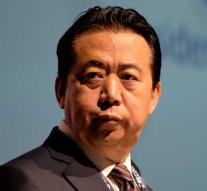 lyon - The Chinese Meng Hongwei has resigned with immediate effect as director of Interpol. The international police organization has announced this on its website. The South Korean Kim Jong-yang will replace him for the time being. At the general meeting in Dubai in November, the countries that are members of Interpol will choose a new boss for the period until 2020.

The 64-year-old Meng flew to China late last month and was arrested after his landing and taken for questioning. The Chinese guard dog against corruption only revealed on Sunday evening that the authorities have instituted a judicial investigation for him because they suspect him of a violation of law.