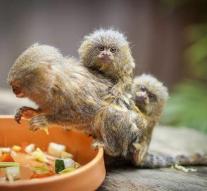 sydney - Two men tried to steal Saturday in Australia three pygmy marmosets from a zoo south of Sydney. That the BBC reports. Police found two monkeys, the mother and her baby, Sunday back in the car of the arrested men. But the male monkey is still missing.

Pygmy Marmosets are the smallest monkeys that live there and are originally from South America. On the black market, they can provide a sum of 3500 euros. The Chinese Year of the Monkey is the question of increased animal possible.