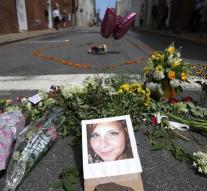 charlottesville - In a theater in downtown Charlottesville, a memorial service was held for Heather Heyer, 32-year-old woman who was killed when she demonstrated against the presence and actions of right-wing extremists in the city on Wednesday.

The speakers praised Heather's passion for goals in which she believed. She described her as a courageous, principled woman with a holy faith in justice and equality. Most listeners dressed in the purple red, her favorite color at the request of the family. Among the attendees were Virginia governor, Terry McAuliffe, Senator Tim Kane and Mayor Mike Signer.