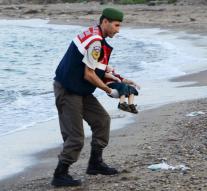 amsterdam - For many of the refugees died on their journey to Europe, find Sunday afternoon in Amsterdam a memorial. These stories of deceased migrants take an important place.

The ecumenical commemoration on the dock for the Hermitage museum on the Amstel in Amsterdam has been announced by the organizers including an obituary in the newspaper. " at the external borders of Europe are daily dramas play out. People who are looking for a better and safer life, drowning in the sea or come in other ways along the way. Mostly nameless, in silence. "

Arjan Plaisier pastor of the Protestant Church in the Netherlands, Father Antonios Saliba of the Syrian Orthodox Church and bishop of the diocese of Haarlem Jan Hendriks cooperate with the meeting. Prior is at the attic of the Protestant parish shown a short documentary and holds senator and teacher migration law Tineke Strik an introduction.

The memorial is an initiative of Church in Action, Justice and Peace Netherlands, the World House of the Protestant and Catholic Worker Parish Amsterdam Amsterdam.