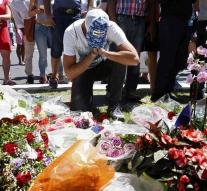 - Christophe Premat, a French MEP, was with his wife and children witnessed the attack with a truck on the boulevard in Nice.

Like so many people Premat was the Socialist Party in Nice to celebrate the national holiday. After a nice evening with fireworks there was a sudden panic. 'I initially did not realize what had happened,' he said in an interview with CNN. 'We grabbed the kids when we saw the crowd began to move and dived inside a building,' he says. 'We had no information but if you looked around you, you knew it was going to a terrorist attack. '

According Nice Premat was well prepared for a possible attack, but there must be more cooperation, according to him, and information should be shared more quickly. 'There is a threat and had been a state of emergency and new laws. We have the means to respond, so it's not a matter of more resources. The point is that you can efficiently deal with the information. '


Premat would not speculate on the motives for the attack. 'We must stand together against this kind of violence to combat it. '