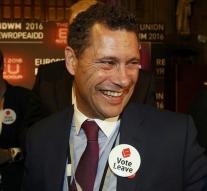 strasbourg - MEP Steven Woolfe of the UK Independence Party UKIP Thursday after an 'altercation' at a meeting with party members in Strasbourg 'in serious condition' in hospital, said UKIP leader Nigel Farage. Woolfe announced Wednesday that he is a candidate for the party leadership.

Farage, who after 'brexit' referendum stepped down as UKIP leader who post takes temporary charge since his successor Diane James, two days ago after only eighteen days leadership stopped it. Woolfe, that Thursday is celebrating its 49th anniversary, is one of the favorites for the position.

'I regret that as a result of an altercation during a UKIP meeting Steven Woolfe has collapsed and transported to the hospital,' Farage reports. According to The Guardian, he would have been hit. UKIP group, comprising 24 members, is in Strasbourg for the plenary session of the parliament. Woolfe since 2014 EU parliamentarian.