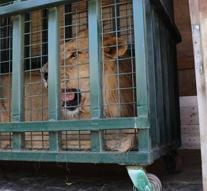 damascus - Animal wardors have freed several unmarried animals, including lions and tigers, from a zoo near the Syrian city of Aleppo. The animals are extensively depleted and dehydrated and have met the war in the city at night.

The guardians of the organization Vier Poten bring the quarters to a shelter in Turkish Karacabey. It's about three lions, two tigers, two asian black bears and two hyenas. Many other animals in this area have not survived the ongoing bombing of the city.

The Syrian government leader again got Aleppo after heavy fighting in December. The animal guardians already brought a bear and a lion from the siege Mosul in Iraq to a safe haven.