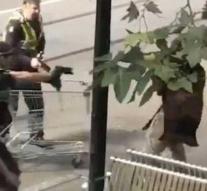 melbourne - The homeless man who attacked the attacker in Melbourne with a shopping cart was arrested for burglary, theft and for an unspecified violation while on bail was free. The Australian police announced this on Saturday.

The radicalized Hassan Khalif Shire Ali killed the owner of a coffee shop last week and wounded two people. He also had gas bottles in his car. 46-year-old Michael Rogers tried to eliminate him by repeatedly ramming a shopping cart on him. Eventually, Ali was shot by the police.