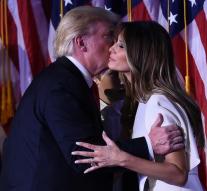 - Melania Trump, born in Slovenia, speaks five languages, has an impressive modeling career behind it, is the brain behind its own jewelery and watch line. And from January First Lady of the United States.

On April 26 1970 Melanija Knavs (translated to Melania Knauss) born in Sevnica, Slovenia. Her father was a car dealer and a member of the Slovenian Communist Party, her mother made children's clothing. At sixteen began modeling career Melania, two years later, she got a modeling contract in Milan. What followed were many covers of prestigious fashion magazines such as Harper's Bazaar and Vanity Fair.

In 1996 moved the 1. 80-meter-long model for New York. Two years later she learned that some 10 centimeters longer businessman Donald Trump at a party. The couple became engaged in 2004 and a year later a spectacular wedding. Billy Joel sang 'Just the way you are ', Melania wore a handmade dress from John Galliano (Dior), which reportedly cost more than a ton and the party was widely reported in the newspapers. Many celebrities were guests, including politician Rudy Giuliani, Heidi Klum, rapper P. Diddy and: presidential candidate Hillary Clinton with her husband and Melania's rival for the title First Lady / Gentleman Bill Clinton.

Son Barron William Trump was born in 2006. He is the first child of Melania, Donald Barron is his fifth child. From his marriage to Ivana Trump are Donald jr., Ivanka and Eric born. Daughter Tiffany from his marriage to Marla Marples.

After her marriage, the former model starts a career as a designer. She launches her own watch and jewelery collection. it also comes with its own skincare line. About her role as first lady she said in previous interviews that she would be a traditional first lady ' like Betty Ford or Jackie Kennedy. ' ' I support my husband. ''

Ten years ago naturalized Slovenian ex-model turned to an American citizen. Incidentally Trump is not the first First Lady who is not US-born. Lousia Adams, the sixth wife of US President John Quincy Adams (between 1825 and 1829), was born in England. But she is the first First Lady ever published a nude photo shoot in a large magazine.