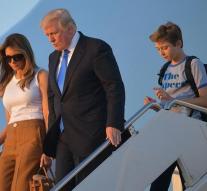 washington - The American First Lady Melania Trump has moved to Washington's White House together with son Barron. That she reports herself on Twitter.

She posted a picture with a view from the White House, with a text about the moving day.

Donald Trump has lived since his election as president of the US in Washington, but his wife and son were still living in the Trump Tower in New York, so son Barron could finish his school year there.