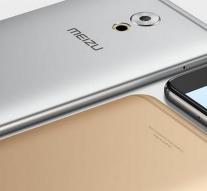 The 5.7-inch phone has a faster processor, a larger battery and a better camera than its 5.2 inch older brother. With the fingerprint sensor on the back can also be measured heart rate. Interestingly, the Pro 6 Plus has a 12 megapixel camera, while the Pro 6 has a camera with a sensor with 21 megapixels.

The new device runs on Flyme 6. This is the newest version of Meizu's skin for Android.

Meizu sells its phones are not directly in the Netherlands. There are some stores that import the devices from Asia.