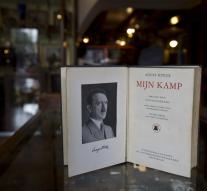 The copyright was owned by the state of Bavaria. That restricted distribution and reprint fear that the political texts would be revived. The IfZ press 4000 copies dispel the many myths surrounding this book, said IfZ chief Andreas Wirsching told the BBC.

The book was largely written by Hitler in 1924 and provided him with a comfortable income. It contains his ideas on the German empire and race and numerous diatribes against the Treaty of Versailles (1919). Thus Germany was officially the loser of the First World War and saddled with reparations.