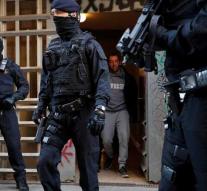 barcelona - More than a hundred agents are in action in Barcelona and 45 kilometers away in Igualada against what the police call a group of jihadists who would like to commit an attack. There are already several...

The police action was baptized 'Operation Alexandria' and started after a long investigation by the national Spanish authorities.

Spanish media reported that the hard core of this group consists of five Algerians. They are suspected of having prepared for terrorism against the national heritage and against public health.

The group is also suspected of other criminal activities.