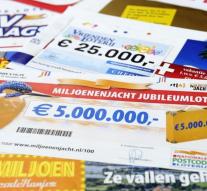 stuttgart - The main prize of 30.7 million euros from the Eurojackpot has fallen in Germany. Two lottery tickets from Baden-Württemberg and Lower Saxony broke the pot, a spokeswoman said Saturday.

An amount of 15.36 million euros goes to a man from Esslingen, the rest presumably to a group of lotto players. Both winners had the numbers 15-22-29-33-47 good, as well as the additional numbers 3 and 7.

The Eurojackpot is open to players from eighteen European countries. For the first time there was also Poland on Friday. The chance to win the prize is 1 to 95 million.