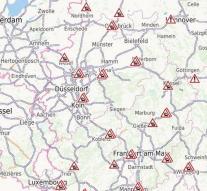 dusseldorf - Easter weekend makes in the German state of North Rhine-Westphalia (NRW) is probably the most congested of the year. The suffering begins, according to the German automobile club, the ADAC (Allgemeiner Deutscher Automobil-Club), all on Thursday.

In the densely populated state is struggling expected mainly traffic to Netherlands with files. ADAC warns in his Stauprognose 'also for files in the south of the crossing direction resorts.

Motorways Thursday streams already full and there are NRW 10 percent more roadwork than at Easter last year. The ADAC has, after consultation with Dutch colleagues tips. So people are from the Düsseldorf and Cologne area recommended Netherlands to drive into the south of Limburg near Aachen rather than at Roermond. ADAC expects to return from the Netherlands Monday also problems east of Roermond, which is working on the German motorway A52 towards Düsseldorf.

Expected to be approximately 950 000 foreigners visit our country at Easter, of whom 65 percent come from Germany.