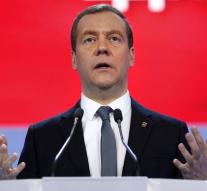 moscow - Russia must abandon the illusion ' '' that Western sanctions were lifted against the country in the foreseeable future. That Prime Minister Dmitry Medvedev said Sunday.

' It is clear that all this will take a long time. Do not trust the election of someone else, the arrival of new leaders abroad, '' said Medvedev, who at a meeting of the Kremlin party United Russia spoke about the agricultural sector.

The United States and the European Union proposed in 2014 sanctions against Russia for its annexation of Crimea and Moscow's support for separatists in eastern Ukraine. The election of Donald Trump for president of the United States raised hopes in Russia that sanctions be eased, but Russian officials have warned that the disagreement with Washington will not be fast out of the world.