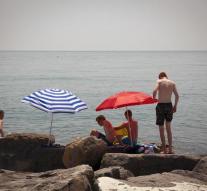 oslo - Global warming threatens to take the Mediterranean harder than any other heat or drought period in the last ten thousand years. Parts of southern Europe may change this century in deserts. So say researchers led by the University of Aix-Marseille in a study published in the journal Science.

If no steps are quickly put to reduce to the south of Spain and Portugal, northern parts of Morocco, Algeria and Tunisia and Sicily, southern Turkey and parts of Syria turning into deserts greenhouse gas emissions. Can drastically change the vegetation in the Mediterranean.

The temperature increase in the area is compared with the end of the nineteenth century already by 1.3 degrees Celsius. Throughout the world, the average temperature rose by 0.85 degrees. The Mediterranean region is particularly vulnerable to climate change because Atlantic storms will shift further north, with more sun and less rain as a result.